Traveling From Los Angeles to Tokyo

We checked out of the Crowne Plaza LAX Hotel early on Wednesday March 6th, because our flight was scheduled to leave at 10:20 am. The hotel shuttle took us to the Tom Bradley International Terminal, where we dropped off our checked baggage. We had already printed out our boarding passes at the hotel. We stopped at the Border Grill Restaurant for breakfast, which was great.

The central area of The Tom Bradley International Terminal is The Antonio R. Villaraigosa Pavillion (both men are former LA Mayors).
What appears to be a tall building with people hanging out of the windows, is actually a video being projected on a screen, soon to be replaced by ads.

A shiny golden metal sculpture sits on a table in front of a shop in the Villaraigosa Pavillion. Reflected in the well polished orb is a reflection of Jim and Karen with their luggage standing perhaps 20 feet away while Jim takes this photo.

The Border Grill in The Villaraigosa Pavillion at the Tom Bradley International Terminal at LAX, We had a wonderful breakfast there.

ANA (All Nippon Airways) Flight NH175 sits at Gate 150 at Los Angeles International Airport on March 6, 2019. It was a rainy day, but the rain wasn’t heavy, and we saw no lightning.

A view of the shops in the Villaraigosa Pavillion in the International Terminal at LAX. The terminal is largely illuminated by the soaring skylight windows, although the clouds and rain have a dimming effect.

This is the projected flight path for our trip from Los Angeles to Tokyo. Estimated flight time is 11 hours 15 minutes.

The view from the Villaraigosa Pavillion looking past Starbucks toward the South Concourse. Our gate 150 was the first gate in the North Concourse on the east side of the terminal.

Karen settles into her seat 33G. I was sitting in 33D. We chose aisle seats on opposite sides of the middle row, hoping no one would want to sit between us. Guess what? No one did! Karen was able to lie down and sleep on our 11 hour 15 minute flight from LA to Tokyo.

Exit sign in Japanese and English on Flight NH175. The aircraft was a Boeing 777-300ER.

Finally, we’re in the air, time to check out the TV. It knows five languages: Japanese, English, French, German, Korean and Chinese!

Plenty of options to keep us occupied.

After a bit over 11 hours and a flight of 5,451 miles across the Pacific, we are almost there.

We’re on our final approach to Tokyo Narita International Airport.

As we were about to leave Terminal 1 at Narita International Airport, we were pulled aside by a Japanese Television Crew. They saw that we were not Japanese, and wanted to interview us about our plans for our visit to Japan. We explained that we would only be in the country for 24 hours, because we were using Narita as a layover in transit to Singapore. A few more polite questions and answers ensued, and they bid us farewell, allowing us to proceed outside to find the shuttle.

A Rainy Night in Narita

When we arrived at the hotel it was raining. We wanted to see the town of Narita,and have an authentic Japanese dinner. We took a taxi to the center of town, and started walking in what we thought was the direction of the Naritasan Shinshoji Temple. Most of the restaurants we saw were pretty empty. Few people ventured out in the rain that evening. We asked a young woman for directions. She took us to a shop where Karen bought an umbrella for $3. The shop owner told us where to find the place we were seeking. The very nice young woman led us there. We went in, chatted with some people from the US and Australia, and decided that we were in the wrong place. We walked outside, flagged down a taxi and returned to the Hilton, where we had a fine dinner in one of the hotel restaurants.

When we retired to our room for the night, we discovered a couple of specifically Japanese appliances. The one on the left looked a lot like a paper shredder, but closer examination revealed it to be a humidifier!

The second appliance was the storied Japanese toilet. It featured all sorts of controls and gizmos, but no instruction manual. Fortunately, the lever on the left looked familiar, and it handled the basics.

Tomorrow, Narita in the Daylight

Tomorrow we’ll take a quick tour of or hotel, and then take the shuttle back to the airport for our flight to Singapore. 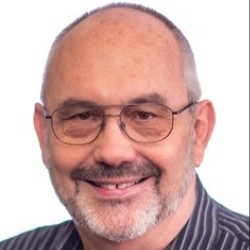